×
Newsyolo.com > entertainment > News queen | The Queen is honoured in a pre-show special scene for EastEnders. 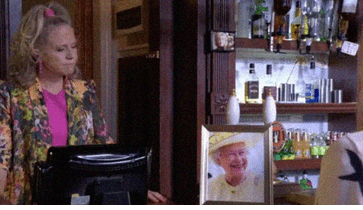 News queen | The Queen is honoured in a pre-show special scene for EastEnders.

In a special pre-credits scene on Monday, EastEnders characters paid respect to Queen Elizabeth II and said that losing her was like losing a grandmother.

In the Old Vic Pub, Linda Carter, Denise Fox, and Kathy Beale huddled around a portrait of the Queen to talk about her “selfless” life of service.

Her recent Platinum Jubilee was said to as “a graceful way to say goodbye” by them.

Denise, played by Diane Parish, uttered the following: “God bless her, she’s been there our whole lives.”

It’s as if she represents everything we have ever known.

Gillian Taylforth’s portrayal of Kathy said, “But it just feels so personal, doesn’t it? Just awful.”

Linda, played by Kellie Bright, retorted, “Well, we have.” We’ve all lost our nan, who devoted her entire life to helping us, thus I guess the country is lost.

We’ll never see somebody like her again, Denise continued after Kathy referred to her as “selfless.”

Kathy also mentioned being present when the Queen was crowned in 1953 while expressing her wish to have been old enough to remember it. I possess the memories of other people.

Diane, then eight or nine years old, recalled the Silver Jubilee celebrations that took place in 1977. She stated, “I simply remember I felt so pleased.” “I only recall how joyful everyone was.”

The Queen, according to Kathy, “made everyone feel so pleased and safe.”

The King Consort, Camilla, and the Prince of Wales, King Charles III, made appearances on EastEnders earlier this year.

When the couple visited Walford, Danny Dyer and the rest of the ensemble welcomed them.

In Monday’s program, while Kathy was reminiscing about the event, she continued, “And what a day we had here, eh? We had Camilla and Prince Charles right here with us.

Long live the king, the three of them said, before announcing that they will pay their respects at Buckingham Palace before Kat and Phil’s wedding.

Linda placed the framed portrait of the Queen next to a bust of Queen Victoria, after whom Walford’s fictional pub is called, to conclude the specially-recorded scenario.

She greeted Queen Victoria and said, “Thank you ma’am, on behalf of all of us. Look after her, won’t you?”

As programming adjustments continue to be made to accommodate news coverage of the Queen’s passing and The King’s succession, last night’s episode of EastEnders was made available on the BBC iPlayer at its regular hour of 19:30.

While BBC One and BBC Two continue to interrupt regular programming, the BBC confirmed that fresh episodes of the soap opera will also be made available online on Tuesday, Wednesday, and Thursday evenings.

On Monday night, Coronation Street made its way back onto television screens, but there was no mention of the Queen’s passing.

During her lifetime, the late monarch paid visits to both soap opera sets.

She first set foot on Coronation Street’s cobblestones in 1982 and returned there last year; in contrast, Barbara Windsor and Wendy Richard gave her a tour of EastEnders’ most iconic locations in 2001.