×
Newsyolo.com > Sports > Nikhat Zareen | PM Modi’s speeches inspire me, and I’d like to meet him after capturing every medal. 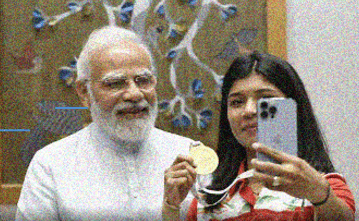 Nikhat Zareen | PM Modi’s speeches inspire me, and I’d like to meet him after capturing every medal.

Nikhat Zareen, who took home a gold medal at the World Boxing Championships, said that she will always treasure the moment she met Prime Minister Narendra Modi.

The two-time gold medalist at the Strandja Memorial said that she hopes to continue competing for medals at the international level so she may keep running into PM Modi.

The 26-year-old Telangana boxer recently (20 May) won gold in the flyweight (52 kg) division in Istanbul with a simple 5-0 victory over Thailand’s Jitpong Jutamas.

I will always treasure this time in my life because it was such a beautiful experience. Although I was anxious before our meeting, PM Sir’s manner made me forget that I was meeting such a powerful person. He continued speaking as if it were a family conversation. He inquired about every detail, including how I should prepare and which nation’s fighter was the hardest to beat. For all of us, the entire interaction with him was enjoyable and unforgettable, Nikhat told IANS.

“I also wanted to take a selfie with PM sir, and I had the chance to do so after winning the gold medal at the World Championship. I want to keep taking home medals at the world level, and I’ll keep running across him,” she remarked.

His speaking style is excellent and inspiring to me. You can see how casual I was speaking by the fact that I even said a “Shayari” to him. Have you ever heard of a player telling a PM sir a Shayari? As a sign of our love and respect, we also gave him our boxing gloves, the boxer from Nizamabad remarked.

Nikhat responded, “It is not that Modi sir meets only the winning players. That is not how I see PM Modi’s support for athletes. We have all seen his interactions with the Indian women’s hockey team after they came so close to winning a medal at the Olympics in Tokyo. He spoke with each team member. During the conversation, I noticed several of the players getting emotional, and I thought our PM did a great job of inspiring everyone. I’m not sure if this used to occur in the past, but it serves as motivation for everyone to put up their best effort and resist giving up.

In the selection trials held in Delhi, Nikhat Zareen defeated Haryana’s Minakshi by a 7-0 unanimous decision to secure a spot in the CWG. She hopes to continue her strong play at CWG 2022 as well.

The bronze medalist from the 2019 Asian Championship, however, stated that winning a medal at the Paris Olympics is the ultimate goal and that the CWG and Asian Games are stepping stones to get there.

“My preparation has been excellent, and I’ll do all in my power to take home a medal at the CWG as well, but like with every athlete, my ultimate objective is to place well at the Olympics. The Paris Games are not far off, according to Nikhat.

According to Nikhat, she is concentrating on the overall preparations rather than bolstering any particular sector.

“I always have a surprise for the opposing boxers. Everyone in the world now is aware of your strong and weak points after seeing all the recordings. I concentrate on the whole preparation because of this. Technology has made it advantageous to know everything about your rivals, so in a way, it’s also disadvantageous when everyone knows everything about you. You should always have something to surprise the opposition in such a situation, she advised, according to IANS.