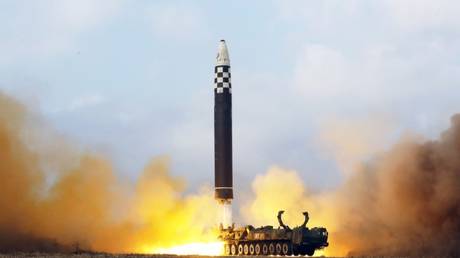 The launch, according to Pyongyang, featured its newest weapon design and was personally overseen by North Korean leader Kim Jong-un.

North Korea has revealed information about its most recent ICBM test, claiming that it used a more modern long-range munition and issuing a dire warning that any further threats from the US and its allies will result in their “self-destruction.”

A Hwasong-17 missile was fired by the DPRK early on Friday, according to a report published on Saturday by the state-run Korean Central News Agency (KCNA), which described the weapon as a “new type” of ICBM. The weapon system, which was first developed in 2020 and recently completed its maiden flight, was said to be the focus of the test, which was aimed at “inspecting the reliability and operation of the weapon system.”

Kim Jong-un, the leader of North Korea, attended the launch along with other senior members of the country’s ruling Workers’ Party of Korea. He cited the “military threat of the US” and its allies in the region in claiming that the test was necessary to support Pyongyang’s “overwhelming nuclear deterrence.”

The test, according to Kim, “will demonstrate to the US, South Korea, and other followers that military counterplay against us is self-destruction and that they will have to reevaluate the wisdom of their decisions.” The enemies’ madness of aggression and war games, which aim to undermine the peace and stability of the Korean peninsula, must be demonstrated by our party and government.

Military sources quoted by KCNA claim that the Hwasong-17 traveled nearly 1,000 kilometers (620 miles) and ascended to a height of 6,040 kilometers (3,750 kilometers) before coming down “accurately in the planned waters of the East Sea of Korea.” The missile, which has a reported range that could reach the US mainland, is believed to be North Korea’s longest-range weapon.

Although the figures provided by South Korea and Japan generally agree with those provided by KCNA, the Japanese Defense Ministry claimed the ICBM landed in Tokyo’s exclusive economic zone, about 200 kilometers (124 miles) west of its Hokkaido prefecture.

South Korea conducted additional live-fire exercises in retaliation for Friday’s test, with its military pledging to “respond resolutely to any threats and provocations, including North Korea’s intercontinental ballistic missile.”

Washington, Seoul, and Tokyo have conducted several joint war games, to which the DPRK has publicly objected, branding them as “attack drills.” To protest the recent military drills, North Korean forces have launched a barrage of missiles, rockets, and artillery rounds into the ocean, including two ICBMs this month alone.