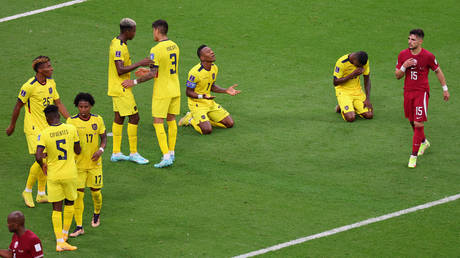 The Middle Eastern nation made history by becoming the first team to ever lose its home World Cup opening match.

Enter Valencia of Ecuador scored twice to defeat Qatar in the opening match of the FIFA 2022 World Cup, making the Qataris the first host nation to lose the first match in the tournament’s 92-year history.

The football finally started on Sunday at the 60,000-seater Al Bayt Stadium in Al Khor, just to the north of Doha, after a contentious build-up that saw much of the Western media fixating on Qatar’s human rights record.

After just three minutes, when Qatar failed to clear their lines following a free-kick, Ecuador captain Valencia nearly gave his team the worst possible start when he headed in from close range.

However, after VAR intervention, the goal was disallowed for offside, igniting the first World Cup controversy on the field. FIFA’s analysis revealed that the decision was correct due to Ecuador’s Michael Estrada’s stray leg.

After giving up nearly two-thirds of the ball in the early going, Qatar was forced to withstand significant Ecuadorian pressure, and the South Americans eventually scored in the 16th minute, once again with Valencia at the center of things.

The tournament’s opening goal was calmly sunk from the penalty spot by Valencia after the forward was brought down as he maneuvered around the helpless Saad Al Sheep of Qatar.

In addition to the three goals he scored in Brazil in 2014, Valencia’s goal was his fourth World Cup goal. It was also the first time a World Cup opening goal has come from the penalty spot.

Valencia didn’t have to wait long to add to his tally; in the 31st minute, he headed in an Angelo Preciado cross with aplomb to double Ecuador’s advantage.