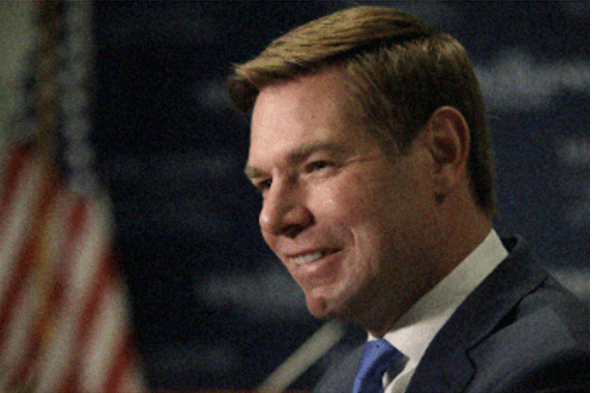 The 38-year-old lawmaker from the Bay Area has elevated his public image in recent years by standing out as one of Trump’s most vocal detractors, ripping into him in a regular stream of tweets and media appearances.

He made his announcement during a pre-recorded appearance on “The Late Show with Stephen Colbert,” where he also chastised Congress for doing little about gun violence, a major issue for him, and highlighted his involvement with the Future Forum, a group that advocates for millennials.

According to Swalwell, “I see a country in quicksand – unable to resolve issues and dangers from abroad, unable to improve life for people here at home.”

Swalwell is a native of Iowa and has recently made several trips there to gain support for his unlikely run for the presidency.

His recently established campaign website features a different video titled “Go big. Be brave. Swalwell emphasized his Iowa background, claimed Trump has advocated “bullishemphasized—t,” and emphasized his youth. He also used the phrase “Do good.” throughout his Colbert interview.

He said in the video, “I’m from the first generation that might fare worse than our parents.

He is one of two Democrats from California running for president, the other being Sen. Kamala Harris, a fellow prosecutor from the Bay Area.

Michael Ahrens, director of communications for the Republican National Committee, referred to Eric Swalwell as “the latest foolish Democrat to enter the race.” “Since he hasn’t passed any legislation, he’s running on the same socialist platforms as the other candidates, including government-run healthcare. Swalwell will never be president because he is too extremist for most Americans.