×
Newsyolo.com > entertainment > Priyanka Chopra and Alexandra Daddario, both stars of Baywatch, congratulate Alexandra on her marria 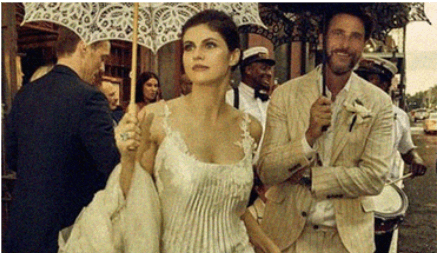 Priyanka Chopra and Alexandra Daddario, both stars of Baywatch, congratulate Alexandra on her marria

The ceremony took place at a New Orleans Preservation Hall in the middle of June.

Hollywood actor Alexandra Daddario tied the knot with producer Andrew From on Friday in a small ceremony decorated in vintage style in New Orleans. The “Baywatch” actor posted a series of photos from her wedding day on Instagram. Shortly after publishing the post, the photos quickly went viral. The pair wed at New Orleans’ Preservation Hall in the middle of June, and two weeks later they released photos from the memorable occasion. <./p>

The San Andreas actor can be seen kissing her hubby Form in the photos. The producer of “A Quiet Place” wore a light pinstripe suit by designer Brunello Cuccinelli, while she chose a long, pleated dress with a trailing tulle veil from Danielle Frankle.

Another image shows the newlyweds holding white and black umbrellas in their hands while kissing one other on the streets of Louisiana.

In the third image, the blue-eyed bride rests her head on her husband’s shoulder as they smile in a sweet photo with a vintage atmosphere.

Fans flooded the comment section with heart emojis and well wishes. Priyanka Chopra, Daddario’s Baywatch co-star, also sent the newlyweds her best wishes “Stunning. Best wishes to you both “On the image, she commented. “I adore you. Congratulations, too. Wishing you a happy life ahead “Added a different user.

Soon after the Slender Man producer’s 15-year marriage to her first wife Jordana Brewster ended in divorce in June 2021, the Hall Pass actor and Form began dating and later got engaged.