×
Newsyolo.com > entertainment > PSY and Suga work together as producers, and the BTS Army is in chaos. 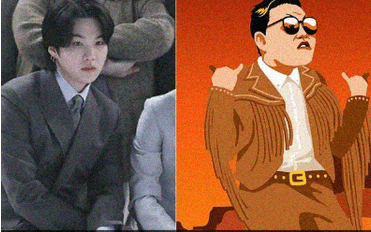 PSY and Suga work together as producers, and the BTS Army is in chaos.

Suga produces the album’s lead single, “That That,” from PSY’s ninth studio album.

Suga (Min Yoongi), a member of BTS, and PSY are the most well-known and accomplished K-pop performers in the world, therefore they require no introduction. After the Gangnam Style singer released the teaser for PSY’s ninth album’s title track, That That, confirming his collaboration with Suga, the two recently shocked their fans. The song is found on PSY’s ninth studio album, PSY. “PSY Full-Length Album [PSY 9th] Track List: #2. That That (prod. SUGA of BTS) *Title Track 2022.04.29 (Fri) 6 PM KST,” he stated when posting the preview on his Twitter account.

In the teaser, PSY is shown jogging slowly while wearing a fringed cowboy outfit. A wistful guitar accompaniment is playing in the backdrop. The background melody is different from PSY’s typical discography.

BTS fans, also known as the Army, were ecstatic to learn that Suga was working with one of the top K-pop musicians as soon as PSY published the teaser. A supporter said, “OMG ALL OF THIS CONTENT AND A NEW CHAPTER WITH HYUNDAI WHEN I JUST WOKED UP! BTS’s production SUGA featuring PSY, OMG!”

Another admirer wrote: “A further masterpiece by Yoongi is “THE GUITAR.” PSY’s song “LET’S GO That That” (produced by SUGA of BTS) will be released on Friday, April 29, 2022, at 6 PM KST. COMING!!”

“Our playlist gonna go from shadow to daechwita, to eight, to #ThatThat a funny & energetic song.. yes, talk about range! gonna be a rollercoaster ride and I love it PROD. SUGA IS COMING,” wrote a fan.

Here is how the Army responded:

our playlist will include the songs Shadow, Daechwita, Eight, and #That. It’s going to be a rollercoaster ride, and I love it. That song is amusing and lively.

Suga from BTS has previously collaborated with singers. He has worked as a producer with several vocalists both inside and outside of South Korea in the past.

Suga discussed his experience working with PSY in a different teaser, saying that at first, he was wary because PSY is older than him. However, once he began working with him, it was as if he were doing so with an old buddy.

On April 29, 2022, PSY’s forthcoming song That That will be made available.