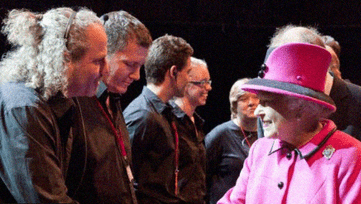 The official funeral for the Queen will be shown on Monday at the Stratford-upon-Avon theatre of the Royal Shakespeare Company (RSC).

Before the funeral service, which will start at 11:00 BST, those interested in attending are welcome to do so starting at 10:00 BST.

Since 1961, Her Majesty the Queen has served as the RSC’s patron.

Starting on Thursday, free tickets for the screening can be reserved through the venue’s website or box office.

On September 19, the theatre will be closed in addition to the screening that will be taking place there.

As a gesture of respect, all scheduled shows and tours have been canceled on a funeral day.

Along with the reading room of the museum, other locations that will be closed include Shakespeare’s New Place, Anne Hathaway’s Cottage, and Shakespeare’s Birthplace in Stratford-upon-Avon.

There will be time for public meditation in the New Place Great Garden.

She will be laid to rest before that in Westminster Hall in London so that people can pay their respects.