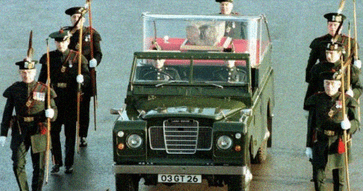 Queen news | Stone of Destiny will make a triumphal return to Westminster Abbey.

For the coronation of the King, a historic symbolic stone will be transported from Edinburgh Castle to London.

King Edward, I took the Stone of Destiny, which had been used for generations to crown Scottish rulers, and used it to create a throne at Westminster Abbey in 1296.

It was given back to Scotland in 1996 and is also known as the Stone of Scone.

The stone will be mentioned in the ceremony for her son because the Queen sat above it when she was crowned in 1953.

There is no specific date for the coronation.

The stone would be used at King Charles III’s coronation and then be returned to the castle’s Crown Room, according to Historic Environment Scotland (HES), which oversees Edinburgh Castle.

The stone will only travel back to Scotland for a coronation in Westminster Abbey, according to HES.

The Stone of Destiny, a chunk of coarse-grained pinkish buff sandstone, is thought to have symbolized Scottish kingship in the past.

The stone was eventually returned to Scotland on St. Andrew’s Day in 1996 after being taken by King of England Edward I in the 13th century. The Crowns of Scotland and England had already been united for about 400 years at this period.

Four students from Scotland are famed for stealing the stone from Westminster Abbey in 1950. It was discovered at Arbroath Abbey’s high altar many months later, 500 miles away.