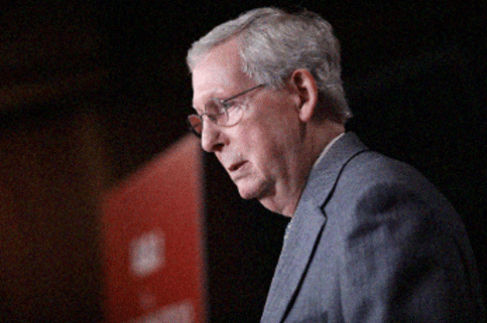 Reform act | Voting on the electoral reform bill is prohibited by McConnell.

Mitch McConnell, the majority leader in the Senate, hasn’t shied away from publicly denouncing the “Green New Deal” and the electoral reform bill from the House Democrats. However, he will only let the Green New Deal go before the Senate for a vote.

At a news conference on Wednesday, Republicans attacked the House Democrats’ electoral reform measure, saying it is just a ploy to skew elections in their favor. The “Democrat Politician Protection Act,” as it has been nicknamed by McConnell, will not be given Senate floor time because it is “offensive to normal voters.”

Because I get to choose what we vote on, McConnell grinned when asked at a press conference why he wasn’t taking the House election reform bill to the Senate floor.

What issue are we attempting to resolve here? McConnell enquired. “Voters are lining up in droves.”

However, to push Democrats on the resolution that Republicans claim is far to the left of the majority of Americans, McConnell announced in February that he will bring a vote on the Green New Deal, the initiative sponsored by freshman Rep. Alexandria Ocasio-Cortez (D-N.Y.).

This week, the law is expected to pass the Democratic-controlled House, making good on many of the members’ campaign promises to reform elections.

The bill includes several voting reforms that Democrats have long advocated for, including as automatic voter registration, an increase in early voting, support for D.C. statehood, and a provision that independent commissions supervise the redistricting of the House of Representatives. Additionally, the bill mandates contributor disclosure for “dark money” organizations.

Democrats claim that the plan will make voting simpler and limit the influence of money in politics.

Republicans, though, said that the plan would amount to election-related federal overreach.

Republicans in the House also criticized Democrats for rushing the bill through. The chairman of the House Administration Committee’s Republican group, Rodney Davis of Illinois, claimed that many committees have jurisdiction over the bill and that not enough study had been done before it was brought to the floor.

Before the bill was brought to the floor under regular order, it was heard by five House committees: the Judiciary, Homeland Security, Ways and Means, Oversight and Reform, and House Administration.