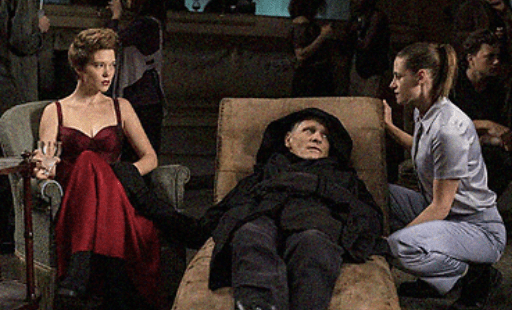 Review of Crimes Of The Future: David Cronenberg’s Brave And Beautiful Bizarre

The 75th Cannes Film Festival saw the world debut of Crimes of the Future in Competition.

David Cronenberg was the helmer.

In Crimes of the Future, David Cronenberg’s first film since 2014’s Maps to the Stars, he returns to pure body-horror science fiction for the first time since 1999’s eXistenZ and casts human organs in a unique and novel light. The result is a hypnotic, scorching metaphor.

Crimes of the Future explores an odd but real world in which pain has vanished and the creation and harvesting of new body parts have been elevated to the status of an art form. It is at the center of an illegal live organ extraction art performance that invariably infuriates the authorities to no end.

It takes some time to figure out what Crimes of the Future is trying to say. In his film, Cronenberg allows a lot of room for interpretation. The swing from one extreme to the other is planned, and it adds to the enjoyment of seeing a 79-year-old provocateur hold nothing back. It is both fascinating and infuriating in equal measure.

Amid physical and environmental crises, the characters themselves—each as vivid as the other, regardless of how much time they spend on screen—never seem to know what they are looking for. This is especially true of a physically expressive dancer with multiple ears swaying to Howard Shore’s music in an evocatively lit nightclub. They continue nonetheless, causing surprises along the road for both themselves and the others watching their act.

Crimes of the Future takes place shortly where man has found the ability to build neo-organs that could live at peace and harmony with “the techno world we have built,” but little else in terms of narrative and theme is borrowed from the 1970 Cronenberg film other than the title.

This is actor Viggo Mortensen’s fourth project with filmmaker David Cronenberg, whom he first met in Cannes twenty years ago, and whose character expresses that motivation. Saul Tenser is a performance artist whose organs are removed in front of live audiences by his girlfriend Caprice, a former trauma surgeon (Lea Seydoux). Like the members of the film’s original audience during its world debut at the 75th Cannes Film Festival, the viewers can only gape in bewilderment and awe.

Crimes of the Future is highly interested in philosophy, psychology, and, last but not least, the absurdity of the human species struggling to maintain control over the bodies and its organs as they change to make pain unimaginably unbearable and to reimagine the very essence and substance of pleasure. In Crimes of the Future, humanity moves ever closer toward resembling a machine. The people in charge of maintaining order come up with strategies to keep an eye on the extreme developments. The altercation gives the narrative tension.

The movie, which is as sharp as it is silly, occasionally seems to be speaking with its tongue firmly in its cheek. At other times, it is distressingly sincere. It explores the distortions – and breakthroughs – that “accelerated evolution” has sparked, necessitating the creation of a National Organs Registry as well as a New Vice police unit charged with controlling violations of the norms of acceptable behavior. As it follows the work of “an artist of the inner landscape,” it swings between the perverse and the pure.

Unsurprisingly, Cronenberg draws out of this masterful work of whimsy several stunning moments; even by his standards, the human body’s organs have never had such a critical part to play as they do in this film. Saul’s journey past his pain threshold as it is known to the world today and Caprice’s less erratic collaboration with the man in acts meant to thrill and fascinate, shock, and seduce, are the subjects of this book.

The first scene of Crimes of the Future shows an eight-year-old boy being smothered by his mother with a pillow because she was annoyed by him munching on a plastic wastepaper basket. Later in the movie, this subplot is brought back to light by the dead boy’s unhappy father Lang Dotrice (Scott Speedman). The latter approached Saul with a plan to do a live autopsy on the corpse to share with the world the knowledge behind the science of plastic’s edible properties.

The first scene of Crimes of the Future shows an eight-year-old boy being smothered by his mother with a pillow because she was annoyed by him munching on a plastic wastepaper basket. Later in the movie, this subplot is brought back to light by the dead boy’s unhappy father Lang Dotrice (Scott Speedman). The latter approached Saul with a plan to do a live autopsy on the corpse to share with the world the knowledge behind the science of plastic’s edible properties.

Cronenberg, however, inserts more significant characters before Crimes of the Future hits this turning point, paving the path for Saul and Caprice to continue trying to up their game. First, there is Mr. Wippet (Don Mckellar) and his erratic assistant Timlin, who are an awkward match (Kristen Stewart). The latter declares that “surgery is the new sex” and begins to develop feelings for Saul in a voice that is more a muted, timid hiss than a clear-throated, I-know-best inflection. Saul rejects her, claiming that he is not skilled in the traditional form of sex.

An investigator from the New Vice section named Welkel Bungie is also involved in the conspiracy. He decides to stop the plastic-eaters in their tracks and tries to ensnare Saul in his schemes.

The efforts of these men and women, who cannot only exist in Cronenberg’s fertile universe but also hold their own in the face of the skepticism and consternation that their boundary-pushing ideas and actions evoke, are defined by freedom from pain, the evolving parameters of pleasure, the shifting of the nodes of arousal, and unbridled ambition.

Even when they are placed in the most horrifying conditions, Mortensen, Seydoux, and Stewart are always more than convincing as Cronenberg’s performers. In what is unquestionably a filmic work of art that is ripe with opportunity. Saul “creates theatre… it has meaning, potent meaning,” as Caprice puts it in his work.