×
Newsyolo.com > Latest > Rublev rallies to advance at the ATP Finals 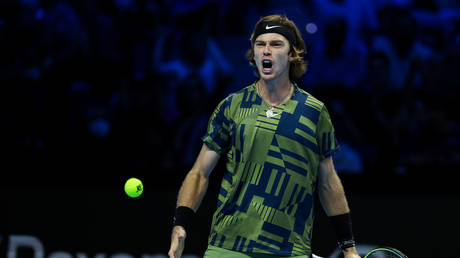 Rublev rallies to advance at the ATP Finals

To advance to the semifinals, the Russians defeated Stefanos Tsitsipas.

After rallying to defeat Greek rival Stefanos Tsitsipas in Turin on Friday, Andrey Rublev guaranteed himself a spot in the final four of the ATP Finals for the first time in his career.

Since each player had won one of their first two round-robin matches, they went into the match knowing that the winner would be guaranteed a spot in the semifinals.

Tsitsipas, the 2019 ATP Finals champion, appeared to have things under control when he won the first set, 6-3. However, Rublev came back to the Pala Alpitour arena with some powerful groundstrokes to win the next two sets, 6-3 6-2.

For the first time in his previous three appearances at the lucrative season-ending showpiece, Rublev, 25, has advanced to the round of four in the ATP Finals. On Saturday, he will play Casper Ruud of Norway.

After winning two of his three round-robin matches, Ruud, 23, was declared the “Green Group” champion in Turin.

Rublev expressed excitement for the upcoming match, saying, “I am looking forward to it because Casper is such a nice person on and off the court.”

He is an excellent player and fighter. It’s going to be a great challenge for me because he has accomplished so much good this season.

The Russian, who is vying for his fifth ATP championship of the year, added, “I hope I will do my best and we’ll see what happens.