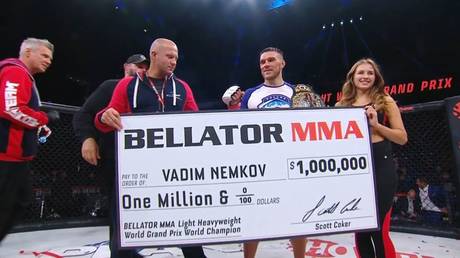 At Bellator 277 in April, Nemkov, 30, squared off against former UFC contender Anderson, but the bout was declared a no-contest due to the Russian’s severe gash sustained in an unintentional head collision.

Nemkov controlled the majority of the action at Chicago’s Wintrust Arena on Friday, stifling Anderson’s grappling and submitting him with a spinning wheel-kick after the first round.

All 15 of his opponent’s attempted takedowns were blocked by Nemkov, who maintained pressure relief throughout the five rounds.

Nemkov celebrated his victory in the ring with his teammate and legendary Russian mixed martial artist Fedor Emelianenko, whose highly anticipated retirement bout against Bellator heavyweight champion Ryan Bader had been announced the previous day.

Nemkov will next compete at Bellator 290 on February 4 against the charismatic Yoel Romero, a former UFC veteran, on the same card as Emelianenko vs. Bader.