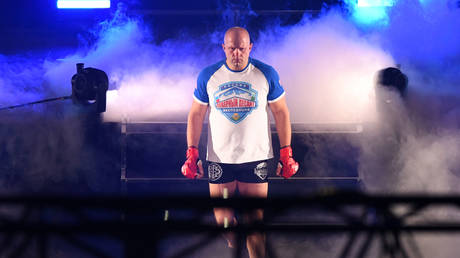 Russia’s “Last Emperor” is given a lucrative farewell fight

At Bellator 290 in February, Fedor Emelianenko will compete against Ryan Bader for the heavyweight championship.

Fedor Emelianenko of Russia and Ryan Bader will square off in a rematch of their heavyweight title fight at Bellator 290 in California in February. It is anticipated that this will be Fedor Emelianenko’s final fight in a glittering career.

The match will air on the US network CBS, the promotion announced on Friday. Emelianenko, 46, had expressed his desire to face Bader once more after losing to the American in the opening round of their title fight at Bellator 214 at the beginning of 2019.

Since then, “The Last Emperor” has won multiple fights with the promotion by first-round knockout, the most recent of which was a victory over Tim Johnson in Moscow in October of last year.

Emelianenko is regarded as one of the greatest heavyweights of all time, if not the greatest, and Bellator boss Scott Coker had been planning a possible Moscow sendoff for him, but those plans were derailed by the conflict in Ukraine.

The Russian legend will instead meet Bader at the Kia Forum in Inglewood, where their first encounter took place.

Emelianenko discussed the fight with Bader on the sidelines of Friday’s Bellator light heavyweight title defense in Chicago, where his teammate and protégé Vadim Nemkov was representing the organization.