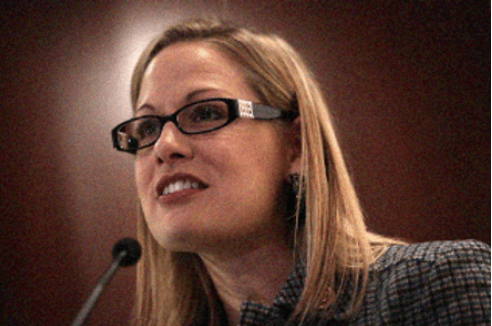 As of Sunday night, Sinema had a 32,640 vote advantage over McSally and now holds 49.6 percent of the vote to McSally’s 48.1 percent. In the state, there are still over 200,000 ballots to be counted, and it might take until the middle of the following week.

On election night, Sinema lagged McSally, but she overtook her late last week when the state started tallying the hundreds of thousands of uncounted ballots. As more votes have been counted each day, Sinema’s lead has grown. Republicans had hoped that as the state started counting early ballots left at polling places on Election Day, they would begin to favor McSally rather than late-arriving early votes, which had tilted toward Sinema. But on Sunday night, Sinema kept expanding her lead.

Maricopa County, the largest county in the state and the home of Phoenix, still needs to count more than 160,000 votes. Currently, Sinema is ahead of McSally in the county by around 46,000 votes.

“Kyrsten’s advantage is unassailable after the most recent vote count. According to McSally’s campaign, today’s results would represent her “firewall,” but as we predicted, no firewall materialized,” said Andrew Piatt, Sinema’s campaign manager.

The winner of the race to succeed retiring Republican Sen. Jeff Flake, between Sinema and McSally, would be the first woman to represent Arizona in the Senate. With more than $50 million spent by the two parties and other organizations, the election was one of the most fiercely contested of the cycle.

There are still three Senate elections to be called, including the one in Arizona. There will be a recount in the Florida election, and a runoff will be held in the Mississippi election in late November. Republicans presently hold a 51-49 majority, but they have gained two seats. to that majority when Democrats won back Nevada while flipping Indiana, Missouri, and North Dakota.