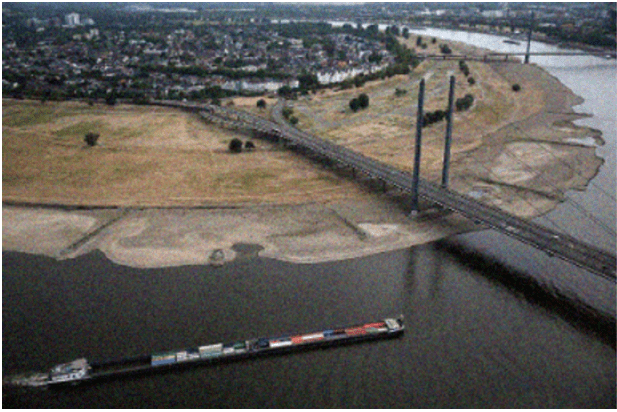 The major business lobby in Germany has issued a warning that firms may be forced to reduce production or stop it altogether because the Rhine’s falling water levels are making it more difficult to move cargo along the river.

German industry’s leading lobby organization issued a warning on Tuesday, saying manufacturers may have to reduce output or stop it altogether because the Rhine River’s falling water levels are making it more difficult to move cargo.

At Emmerich, close to the Dutch border, the Rhine’s water levels decreased by an additional four centimeters (1.6 inches) in 24 hours, reaching zero on the depth gauge.

The shipping lane itself, according to the authorities, still has a depth of close to 200 centimeters (six feet, six inches), but Tuesday morning’s record low measurement emphasizes the serious water shortage brought on by months of drought that have affected most of Europe.

The supply security of industry is threatened by the protracted drought and the low water levels, according to Holger Loesch, deputy chairman of the business lobbying organization BDI.

A paucity of drivers and constrained rail capacity, according to Loesch, make it challenging to move freight from a river to a train or other mode of transportation.

He added that this might cause supply bottlenecks and short-term work might follow. “It’s only a matter of time before facilities in the chemical and steel industry have to be switched off, petroleum and construction materials won’t reach their destination, and high-capacity and heavy-goods transports can’t be carried out anymore,” he said.

Loesch cautioned that the impact on ships carrying coal and gasoline down the Rhine could further restrict the energy supply.

He repeated worries that droughts might become more common as a result of climate change and urged the government to assist in regularly monitoring water levels and taking prompt action in the event of potential transportation issues on Germany’s waterways.