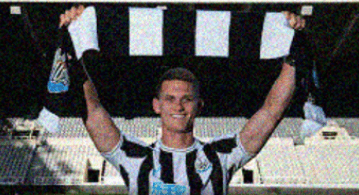 Newcastle United announced on Friday that it has finalized the five-year transfer of Dutch defender Sven Botman from Lille.

The price was not made public, but according to British media, the 22-year-old signed on for 35 million pounds ($42.33 million).

I’m quite glad, thrilled, and eager to begin this new experience, Botman declared. “Signing a contract with Newcastle United is the finest day of my life,” the player exclaimed. I’ve worked so hard for this day, therefore I’m very happy.

“Newcastle played in the Premier League, which is the best league in Europe, and they had a long-term goal to become the best, for both me and the club.

“Everything about the box is perfect. I’m eager to meet the supporters and my new teammates right now.

“Everything about the box is perfect. I’m eager to meet the supporters and my new teammates right now.

Newcastle was acquired by a Saudi Arabia-led group in October, giving them a bigger transfer budget than normal.

Botman won the 2020–21 Ligue 1 championship during his two seasons in France. He has not yet represented the senior Netherlands side.

“I’m thrilled Sven will be working with us. He has a tremendous mentality, is physically quite strong, and is highly technically proficient, according to coach Eddie Howe.

“At 22, he has substantial experience at the highest level and is still young enough to develop with this club. I am eager to start working with him and observe him with his new teammates.