×
Newsyolo.com > Sports > Sports | In a major meltdown, an Australian agitator calls a Wimbledon official a “snitch.” 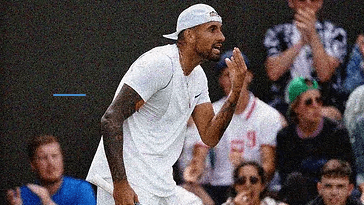 Sports | In a major meltdown, an Australian agitator calls a Wimbledon official a “snitch.”

In London, Nick Kyrgios fought with a line judge and yelled at spectators.

During his first-round encounter against Britain’s Paul Jubb on Tuesday, Australian hothead Nick Kyrgios erupted in a series of outbursts at Wimbledon, yelling at a line judge and spectators and hitting a ball into the stands.

Known for his outbursts on the court, Kyrgios lived up to it during a heated match against world No. 219 Jubb.

After the officials had a dispute during the opening set, Kyrios yelled at the umpire and called the female line judge a “snitch” who had “no fans.”

In a fit of rage, Kyrgios also smashed a ball far over the spectators on Court Three, receiving a ball abuse warning as he dropped the opening set 3-6.

The Australian, 27, got himself back on track by winning the following two sets 6-1 7-5. However, he dropped the fourth set in a tiebreak, which forced a decider that Kyrgios won 7-5 over a tenacious opponent.

The match was regularly disrupted by Kyrgios’ theatrics as he yelled at spectators for allegedly conversing in between points.

“You must order them to stop,” They are onlookers. They have no right to act in that manner. They are paying guests who came to watch us play. They ought to be taken out.

“I don’t approach them in the middle of their 9 to 5 and begin cheering when they’re scanning stuff at the grocery store. Why do they keep doing it when they have no right to?

“But a cap with two logos is unacceptable to you? What is the boundary? When does it stop being OK to practice racism in that way? Where then is the line?

“I would say the same thing if they were booing him or calling him racial epithets between his first and second serves.”

When in top form, Kyrgios is considered to be one of the most dangerous players in the world on grass, but he regularly lets his temper get the best of him on the court.