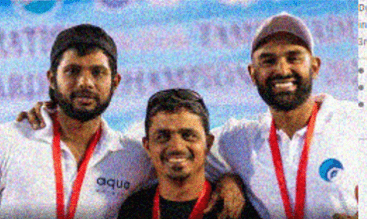 At the third, All India Kiteboarding Championships on Thursday, Dylan Fernandes and Katya Saini won the titles for the men’s and women’s divisions, respectively.

The organizers were unsure about the competition as the championship’s final day approached because of the unfavorable wind conditions.

With a net score of 10.00, Dylan, who had been in first place in the men’s division on Day 2, outperformed the champion Arjun Motha of Aqua Outback and Jehan Hoshi Driver of Quest Adventure Sports Academy. With total net scores of 19.00 and 22.00, Arjun and Jehan kept their positions as 2nd and 3rd, respectively.

In the women’s division, Aqua Outback’s Katya Saini, who had been in first place from Day 1 onward, ended the regatta as the Women’s National Champion with a total net score of 8.0. With a 14.00 and 30.00 total net score, respectively, PKA’s Keona Rajani and Avishma Matta came in second and third, respectively.

Being involved in such a fierce competition was humbling. I performed consistently, and my confidence paid off. I’m thrilled to have won the women’s title, Katya exclaimed with pride.

The Yachting Association of India’s Captain Jitendra Dixit, Ashoke Takkar, and Ajit Diaz, the presidents of the Tamil Nadu Sailing Association and the Chennai Sailing Academy attended the championships’ last day of competition.

“This competition not only crowned new champions but also prepared our nation for the forthcoming Asian Games and Olympics. Dixit states, “We are determined to send kiteboarders from India to compete in international events.

The tournament included racers of diverse ages and origins; the youngest was Siddharth George, age 13, and the oldest was Phillipe Dartnell, age 67, who placed fourth in the men’s division.