×
Newsyolo.com > entertainment > Supermodel Gigi Hadid is the main topic of this year’s memes for the Met Gala 2022. 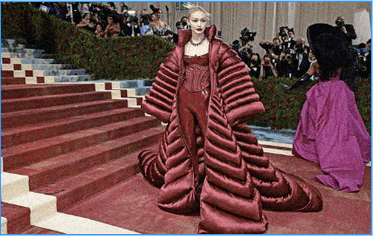 Supermodel Gigi Hadid is the main topic of this year’s memes for the Met Gala 2022.

The Internet generated some intriguing analogies for the Met Gala 2022.

Supermodel Gigi Hadid, a Met Gala veteran, appeared in a unique dress in New Delhi. She practically matched the red carpet by donning a red Atelier Versace puffer coat over a red catsuit. As usual, the Internet had a comment about her particular piece of clothing. While some Twitter users commented that her OOTD resembled a sofa, others believed it reminded them of a scene from Disney’s Lizzie McGuire. “In America: An Anthology of Fashion” served as this year’s Met Gala theme, and Gigi Hadid’s ensemble was a “contemporary rendition of jackets from the late 1800s.”

Here are pictures of Gigi Hadid from the Met Gala:

Versace explained how to interpret Gigi Hadid’s Met Gala ensemble on its official Instagram page, writing: “Gigi Hadid attends the Met Gala in 2022 wearing a custom-made puffer coat by Atelier Versace over a corset catsuit. This ensemble is a modern take on coats from the late 1800s and a reimagining of the Dolman silhouette for a new era of glitz. The huge opera coat is made of a rich jewel-toned burgundy silk Duchesse, has a degraded quilted finish, and is layered over a latex catsuit with a boned corset and an Atelier Versace pointy neckline. A lavish exhibition of contrast between the corset and the jacket’s exaggerated volume is inspired by the late 1800s’ dramatic change in womenswear styles and its volume.”

Now see how Gigi’s clothing has been interpreted online. She wore her sofa literally, as one Twitter user put it.

Fans of Lizzie McGuire would understand. And here is a visual representation for the rest of you. “I’m sure all of us who watched Lizzie McGuire growing up thought of this right away.” a Twitter user wrote.

Without the puffy coat? possibly a little.

Gigi Hadid has appeared on the covers of prestigious fashion magazines and walked the runway for top designers including Marc Jacobs, Chanel, Michael Kors, Jean Paul Gaultier, and Max Mara. She gave birth to daughter Khai with her ex-boyfriend Zayn Malik.