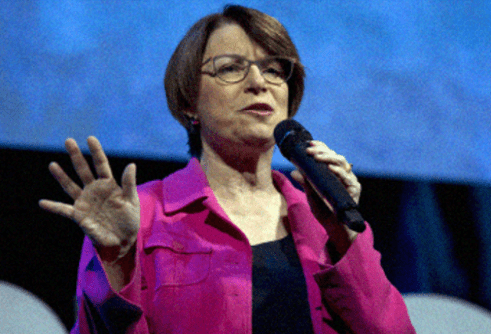 On Monday, Amy Klobuchar joined a small group of other 2020 candidates in making her financial disclosures public. She did so by releasing twelve years’ worth of tax returns.

The Minnesota Democrat made available her family’s tax returns from 2017 to 2006, the year she won her first Senate election. Klobuchar stated that “transparency and accountability are vital to effective governance” on a page devoted to her tax records.

According to the records, Klobuchar and her husband Jonathan Bessler, a lawyer and lecturer at a law school, earned just under $300,000 in 2017 and paid little over $62,000 in federal taxes.

Since President Donald Trump refused to submit his tax records during the 2016 presidential campaign, raising concerns about his financial investments, publishing tax returns has become more important for Democrats. Senators Kirsten Gillibrand of New York and Elizabeth Warren of Massachusetts, as well as Governor Jay Inslee of Washington, have all made their tax returns public.

Gillibrand released her tax returns for the year this past week, making her the first presidential candidate to do so. Inslee has done the same. Some returns may not have been finished as of the filing deadline of April 15 for 2018 taxes.

Vermont Senator Bernie Sanders released his 2016 tax returns, but after announcing his candidacy for president in 2020, he promised to reveal a decade’s worth of taxes “soon.” He hasn’t revealed them yet, and he hasn’t given himself a deadline.

According to their tax returns, Klobuchar and her husband’s income rose over the last ten years from their joint income of $215,000 in 2006. They paid approximately $42,000 in federal taxes during Klobuchar’s tenure as Hennepin County’s top prosecutor that year.

In 2015, the same year that her memoir, “The Senator Next Door,” was published, Klobuchar claimed to have made an additional $75,000.

More than $47,000 in itemized deductions were included on the Klobuchar-Bessler return for 2017. $36,884 of that went to municipal and state taxes. That This year, that won’t be the case: The deduction for state and local taxes is limited to $10,000 under the new Trump tax code, which was passed at the end of 2017.