×
Newsyolo.com > Latest > To advance to the season-ending showpiece final, Djokovic defeats his US rival. 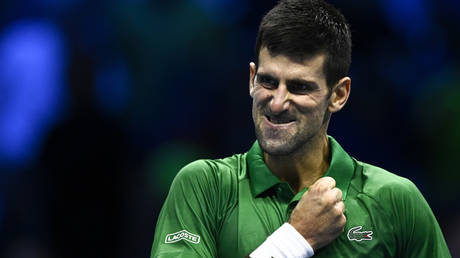 To advance to the season-ending showpiece final, Djokovic defeats his US rival.

At the ATP Finals on Saturday, the Serb defeated Taylor Fritz to advance to the semifinals.

After defeating Taylor Fritz in their semifinal match in Turin, Novak Djokovic continued his quest for a record-tying sixth ATP Finals victory.

Djokovic returned to the court at the Pala Alpitour less than 24 hours after his final group-stage match on Friday against Daniil Medvedev, where he prevailed after a grueling three-hour, three-set struggle. Fritz was better rested.

At 5-4, Fritz was serving for the second set when Djokovic broke back and won the tie-break.

With this victory, the Serb’s perfect head-to-head record against Fritz is now six wins out of six in their encounters.

Djokovic, 35, advanced past the group stage in Turin with three victories in a row. Should he win the tournament on Sunday, he will earn nearly $4.75 million as an undefeated champion.

Additionally, Djokovic would match Roger Federer’s ATP Finals record of six victories. The last of Djokovic’s five victories at the competition occurred in 2015 when the competition was held in London.

Djokovic will next play the winner of Saturday’s second semifinal between Norway’s Casper Ruud, who advanced through his group with two wins from three matches, and Russia’s Andrey Rublev, who Djokovic defeated in the round-robin stage.