×
Newsyolo.com > entertainment > Tom Cruise Is Always On The Ball As Pete Mitchell in Top Gun: Maverick 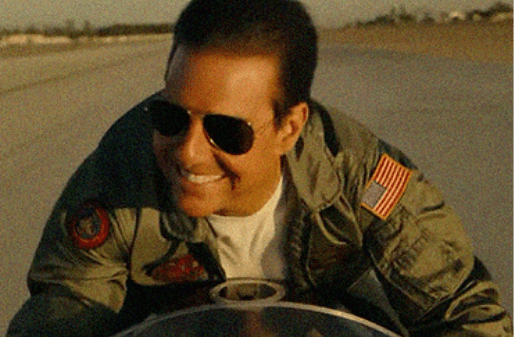 Tom Cruise Is Always On The Ball As Pete Mitchell in Top Gun: Maverick

Joseph Kosinski is the filmmaker

Top Gun creators Maverick aim high and fly low. The plan is effective. It makes sure they don’t miss the goal they’ve set for themselves, together with lead actor Tom Cruise, who is taking the wheel again after a 36-year absence.

Since 1986’s Top Gun, which provided Cruise with one of his acting career’s early huge hits, a lot has changed. Given the charisma the actor radiates and in particular the fact that the movie comes out after two trying years for the entire world, this one too has the potential to be a hit.

The sequel, which was directed by Joseph Kosinski and written by Ehren Kruger, Eric Warren Singer, and Christopher McQuarrie, doesn’t quite “turn and burn” like the film’s trainee pilots are advised to do, but it still manages to fly around pretty stylishly, effectively, and, most importantly, entertainingly.

As Pete “Maverick” Mitchell, a navy pilot who has refused to take a promotion to avoid being called away from active flying duty, Cruise, who is approaching 60 in real life, is always on the ball. Maverick from Top Gun embodies the hero’s I’ll-hang-in-there-no-matter-what mentality. Even though the emotional stakes at the center of the story lend some dimension to the plot, it keeps firmly on course and avoids needless detours.

The drama unfolds on several different levels. The main one naturally concerns Maverick’s tense relationship with the elite pilots who are called from their squadrons to be prepped for a mission that would test them to the “breaking point.” If they have any admiration at all, it is at best grudging for their reluctant teacher.

How Pete Mitchell manages to rouse them from their crusty shells and lead them in an assault on a rebel mountain state that is covertly enriching uranium in a facility tucked away in a difficult-to-reach gorge. There are risks involved in the mission. Maverick is conscious that it might be his last.

Another narrative line, which adds some emotional weight to the proceedings, concerns Maverick’s uncomfortable interactions with Lieutenant Bradley “Rooster” Bradshaw (Miles Teller), the fighter pilot’s son who tragically lost his life in Top Gun. Too frequently, tensions between the two men reach a fever pitch, endangering the operation that Maverick is under intense pressure from his superiors to complete.

Maverick’s attempts to mend his relationship with Penelope “Penny” Benjamin (Jennifer Connelly), with whom the latter’s adolescent daughter Amelia (Liliana Wray) is perfectly OK, are a less important but no less interesting plot point.

Therefore, even though Lieutenant Natasha “Phoenix” Trace (Monica Barbaro), a woman, and their flying machines are the focus of Top Gun: Maverick, the movie does not veer too far from the emotional and mental struggles the leader must face as he prepares his wards and moves his superior out of the way for the mission. Sparks fly as Maverick works every muscle in his body to win the trust of the aspiring pilots.

Kosinski, who helmed Cruise in Oblivion, respects the tradition of Top Gun and places the star at the center of the narrative while paying little attention to the plot. He constantly unleashes stunning aerial movement.

The show’s star, who is no longer the vivacious young guy he was in the middle of the 1980s, is keenly aware of how much time has passed and incorporates this awareness into both the physical and psychological aspects of the character he plays.

Several times, the term “time” is invoked. On one, a speechless Admiral Tom “Iceman” Kazansky (Val Kilmer) says, “There is yet time.” There is? The film Top Gun – Maverick performs an outstanding job of using the charisma of an aging actor to carry a story that entirely depends on how well star charisma is harnessed.

Rear Admiral Chester “Hammer” Cain (Ed Harris) suggests early on in the movie that pilots like Maverick might soon be a thing of the past. He tells Mav, “Your kind is doomed to extinction. Unsurprisingly, the latter is unfazed. “Perhaps so,” he responds. But not right now.

Old-fashioned movie stars who could draw crowds to theatres to see even unremarkable films are an anachronism, just as fighter jet pilots who flew over targets in the past. Bombs may now be launched on targets from a distance, and in the era of franchises, movies are no longer only about the actors who feature in them; they are now about “brand loyalty.”

Tom Cruise takes us back to simpler times in Top Gun – Maverick, when he could make donning aviator sunglasses feel like a cultural breakthrough and getting into a cockpit look like a move intended to set men apart from boys. For the movie’s past, watch it. There are many references to the first Top Gun throughout.