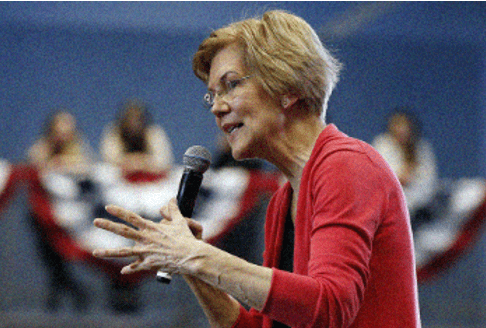 Sen. Elizabeth Warren (D-Mass.) is continuing to assemble her 2020 campaign team with some of the best candidates in the party, adding two DNC staffers who were instrumental in the 2018 midterm elections as well as a high-ranking DSC operative, according to two sources familiar with the developments who spoke to POLITICO.

Additionally, sources told POLITICO that by the end of the month, Warren is planning a tour of the early presidential primary states of South Carolina and Nevada in addition to another trip to New Hampshire this weekend.

The three new hires have joined the team at a time when skilled workers are in high demand in the vast Democratic sector. All three have experience on a national level with digital fundraising and organizing.

Caitlin Mitchell, who most recently worked as the DNC’s chief mobilization officer and helped earn more than $100 million in grassroots contributions during the 2018 midterm election cycle, has joined Warren’s exploratory campaign. In addition, Mitchell held positions as vice president of digital at EMILY’s List and as deputy digital director for the DNC. Mitchell, who left the DNC earlier this month, will assume a senior position and assist with digital organizing for the Warren exploratory campaign.

Tessa Simonds, who oversaw the largest national digital organizing effort in the nation as the DNC’s director of grassroots mobilization in 2018, is also joining the team. She worked as the DNC’s temporary digital director in 2016. Simonds worked for the Texas Democratic Party before joining the DNC.

Tracey Lewis, who has expertise in New Hampshire and southern states and most recently served as deputy executive director and chief operating officer at the DSCC, is joining the Warren team in a senior capacity. After serving as Warren’s deputy campaign manager in 2012, Lewis rejoins the senator’s team.

The most recent round of hiring comes after the campaign added a who’s who of Iowa employees including Richard McDaniel, a sought-after operative who worked as Sen. Doug Jones’ political director and field director as well as Hillary Clinton’s regional director for the primary states (D-Ala.). Additionally, she employed Joe Rospars, who oversaw the digital strategy for former President Barack Obama in 2008 and 2012.

Warren has jumped ahead of the prospective Democratic field with a New Year’s Eve exploratory presidential campaign launch. She has started hiring top staff members and has already made trips to Iowa and New Hampshire before other potential competitors have even begun their campaigns. In Iowa, Warren attracted sold-out crowds earlier this month, including one full venue in Des Moines that drew more than 1,000 people.

The expansion of campaign announcements has been the backdrop for Warren’s staff changes. On Friday, Rep. Tulsi Gabbard (D-Hawaii) declared her intention to run for president on CNN. Julián Castro, a former secretary of housing and urban development, started his campaign on Saturday. Sen. Kirsten Gillibrand of New York announced this on “The Late Show with Stephen Colbert” on Tuesday night while she was a guest.