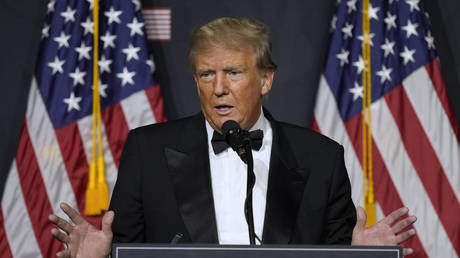 The former president claims the investigation by the special counsel will be “rigged” against him.

Donald Trump, a former US president, has criticized the Department of Justice after it opened a new investigation into possible misconduct, claiming the “corrupt and highly political” organization is abusing its authority.

Speaking at a gathering at his Mar-a-Lago resort in Palm Beach, Florida, on Friday night, Trump criticized the DOJ after Attorney General Merrick Garland announced he would name a new special counsel to look into the former president in connection with the riot at the US Capitol last year and the alleged presence of classified documents at Trump’s home.

He addressed the crowd, saying, “I want to address the horrific announcement made today by the egregiously corrupt Biden administration and their weaponized Department of Justice.” This appalling abuse of authority is the most recent in a long line of witch hunts.

Trump stated that he believed earlier inquiries into the Capitol riot and “the document hoax” were already “dead,” but he also stated that “the corrupt and highly political Justice Department just appointed a super radical left special counsel… to start the process all over again.”

Jack Smith, a “veteran career prosecutor,” was chosen by Garland to look into any potential wrongdoing by Trump, and he was permitted to prosecute “any federal crimes that may arise from those investigations,” according to Garland.

At Mar-a-Lago, Trump told supporters that the decision may have been influenced by Republican promises to look into President Joe Biden and his son Hunter, whose past foreign business dealings have drawn scrutiny. In earlier remarks to Fox News, Trump suggested the new investigation may be connected to his recently announced candidacy for the 2024 presidential race.