×
Newsyolo.com > World > US Army | Mold is a losing struggle for the US Army. 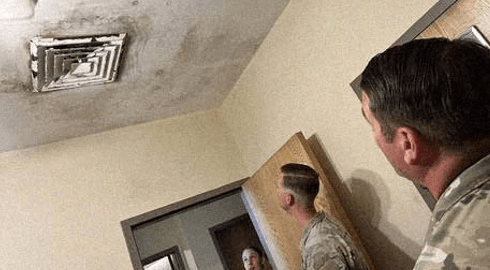 US Army | Mold is a losing struggle for the US Army.

Barracks infestations have been discovered at another significant garrison, weeks after troops had to be relocated at America’s largest facility.

Mould is a tenacious enemy that might endanger the health of soldiers at some of America’s greatest military locations, while the US Army juggles escalating security dangers throughout the globe.

A popular TikTok video has revealed similar problems at Fort Stewart in Georgia, weeks after mould infestations in more than a dozen dormitories prompted the Army to move roughly 1,100 soldiers to its largest facility, North Carolina’s Fort Bragg. There is no simple fix for the mould damage that has become widespread “across the Army,” as the website Military.com reported on Friday. Army authorities at Fort Stewart, according to the publication, “had no plans other than to wait a decade for new facilities.”

One soldier who just returned to Fort Stewart from a protracted deployment in Europe found that “mould had entirely eaten his room,” according to Military.com reporter Steve Beynon, who spoke with more than 20 soldiers. The majority of the soldier’s possessions were destroyed, the bed had become black and green, and the walls were coated in mould.

A video that was uploaded earlier this week on the well-known TikTok account “US Army WTF! Moments” showed someone opening two closet doors to reveal what seemed to be black mould-covered walls. The caption on the video reads, “Fort Stewart barracks.”

When he was stationed at Fort Stewart in the past, according to one commentator, the ceiling had a “six-inch mould carpet.” Others claimed they had encountered comparable or worse infestations at other US sites, including Camp Pendleton in California and Fort Gordon in Georgia. Another spectator remarked, “But our government is giving money, tonnes of money, to Ukraine when our military can’t get a safe place to sleep.”

Leaders at Hunter Army Airfield and Fort Stewart have attributed the mould problem to ageing HVAC systems and heavy humidity. They ordered more room inspections and cleanliness work by the troops and their enlisted supervisors in response to the most recent infestations. By the end of 2033, the damaged barracks are expected to be restored.

The senior enlisted member of the 3rd Infantry Division informed the top noncommissioned officers at Fort Stewart, “We’ve got to be held accountable. “We’re going to figure out what has to be done, solve it, and then move on. I’m about to enter your barracks. You must perform your duties; I will perform mine.

Fort Stewart provided the majority of the 7,000 soldiers that President Joe Biden dispatched to Germany earlier this year in response to the Russia-Ukraine situation.