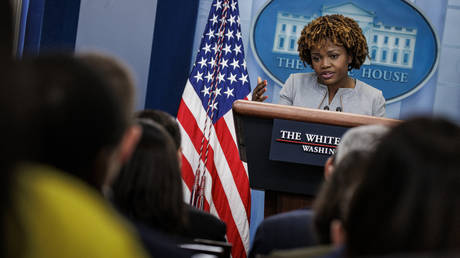 According to White House Press Secretary Karine Jean-Pierre, Moscow has not been willing to engage in serious negotiations.

The White House claims that Moscow’s actions contradict the official statements it makes and that Moscow is not acting in good faith when negotiating a potential prisoner swap between the two nations.

Press Secretary Karine Jean-Pierre discussed Washington’s efforts to secure the release of American citizens held in Russian custody during a regular press briefing on Friday. The spokeswoman claimed that through available diplomatic channels, the US had made an offer and suggested “alternative potential ways forward” to Russia.

The Russian government’s actions, according to Jean-Pierre, “contradict what they have said publicly.” They haven’t seriously attempted to negotiate through the established channel or any other channel over the past few months, she claimed.

She said Moscow had “consistently… failed to negotiate in good faith” despite Washington making a “substantial offer,” but she would not go into further detail about the negotiations. They must bargain in good faith, the spokeswoman emphasized.

Sergey Ryabkov, the deputy foreign minister of Russia, stated earlier on Friday that Moscow and Washington are in secret talks regarding the possibility of exchanging prisoners for jailed Russian businessman Viktor Bout, who was given a 25-year sentence for allegedly trafficking guns in 2012. Bout asserts his innocence.

Although “the Americans are showing certain activity,” Ryabkov said that Moscow and Washington “haven’t found common ground yet.”

According to a CNN report from last month, US President Joe Biden’s administration had been working to secure the release of Brittney Griner, a WNBA basketball player, and Paul Whelan, a former US Marine, who had been convicted in Russia of smuggling drugs and espionage, respectively. According to the US, both have been “wrongfully detained.”

Konstantin Yaroshenko, a Russian pilot who had spent 12 years in prison in the US on drug trafficking charges, and Trevor Reed, a former US Marine who had been found guilty of assaulting a police officer in Moscow and given a nine-year prison sentence, were exchanged as part of a prisoner swap between Moscow and Washington that was completed in late April.