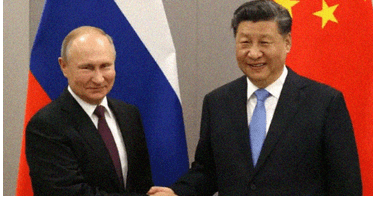 At their meeting later this week, Russian President Vladimir Putin and Chinese President Xi Jinping are expected to discuss the conflict in Ukraine as well as other “international and regional topics,” according to the Kremlin.

The two will meet in Uzbekistan for a summit that, according to the Kremlin, will present an “alternative” to the West.

Mr. Xi is traveling abroad for the first time since the outbreak started.

While Mr. Putin’s ties with the West are at an all-time low due to Ukraine, he is running for an unprecedented third term.

On Wednesday, Mr. Xi will fly to Kazakhstan to start a three-day tour. The Shanghai Cooperation Organization (SCO) Summit in Samarkand, which takes place from September 15 to 16, is where he will next meet Mr. Putin.

Putin will also meet with the presidents of India, Pakistan, Turkey, and Iran, but his meeting with the Chinese leader “is of particular importance,” according to Yuri Ushakov, the Kremlin’s spokesman for foreign policy.

He stated that the meeting was occurring “against the backdrop of significant political developments.”

The Shanghai Cooperation Organization (SCO), created in 2001 by four former Soviet Central Asian states, has long been positioned by China and Russia as an alternative to Western multilateral organizations.

Mr. Xi’s visit takes place as China, where his “zero Covid” policy is still in effect, experiences a new round of lockdowns. Beijing continues to close down entire cities and provinces whenever there is a spike in cases, while the rest of the world has opened up and learned to live with the illness.

Mr. Xi last traveled outside of China in January 2020, just days before Wuhan’s initial shutdown, to visit Myanmar. Since then, he has stayed in China, only traveled traveling to Hong Kong in July of this year.

Also making a rare trip abroad is Mr. Putin. It was only his second travel abroad since Russian forces invaded Ukraine when he met with Turkish and Iranian leaders in Tehran in July.

The two presidents have met twice this year; their first encounter took place during the Winter Olympics in Beijing in February.

The two leaders said in a joint statement that the friendship between their nations knew “no bounds” after their meeting in February. Days later, Russia invaded Ukraine; China neither denounced nor endorsed this conduct. Beijing has said that both sides are at fault.

China does not participate in the international sanctions imposed on Russia, and trade between the two nations has increased. Since the invasion of Ukraine, Indian and Chinese imports of Russian oil have increased dramatically.

Following tensions over Taiwan’s self-rule, China has also seen its relations with the West, and especially the US, deteriorate recently. The island is allegedly a part of Chinese territory.

After US House Speaker Nancy Pelosi visited the island last month, Beijing imposed a five-day military embargo on it.

According to observers of China, Mr. Xi’s choice to depart the country after more than two years, despite serious domestic difficulties like as debilitating lockdowns and a deteriorating economy, demonstrates his confidence in his ability to lead.

At the forthcoming Chinese Communist Party Congress in October, analysts anticipate his reelection for a historic third term.

By avoiding overseas travel for more than two years, China’s president considerably decreased his risk of contracting the coronavirus (presuming, of course, that he has not already been infected and we are unaware of it).

The decision to keep Xi Jinping at home also served a propaganda function, sending a signal to the Chinese people that they too should avoid traveling abroad at this time.

Does Mr. Xi’s decision to resume traveling now indicate that the Party believes it is safer for him to do so?

Another query is: why is it safe now if it wasn’t safe a year ago?

Will Mr. Xi’s appearances in other nations raise hopes that travel restrictions should be further relaxed to make it easier for Chinese citizens to travel abroad once more?

We never really know the full reasons behind such judgments in China since the administration doesn’t feel the need to explain them.

This journey will be viewed in China, meanwhile, as a minor sign that the nation may soon relax its “zero Covid” regulations.

I say “may” because, if the government has a strategy to gradually relax its stringent coronavirus measures, it most definitely isn’t letting the public know about it.

The Shanghai Cooperation Organization: What is it?

In 2001, China, Russia, Kazakhstan, Kyrgyzstan, Tajikistan, and Uzbekistan established the SCO, an organization for political, economic, and security cooperation in Eurasia. Currently seeking membership in Iran.

The summit’s participants will talk about trade, as China is a significant investor in the area through its Belt and Road initiatives.

Central Asian nations are anxious about expanded ties with China, while Beijing has long sought to open up new train routes for its trade with Europe.

Kyrgyzstan stated earlier this year that work on a new line connecting it to China and Uzbekistan will start in 2023.